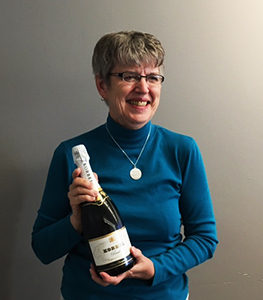 Loretta Hall president of New Mexico Press Women and member of the Steering ommittee of Albuquerque Press Women, is the 2016 Communicator of Achievement Award recipient from the National Federation of Press Women (NFPW). She received the award during the organization’s annual conference, held this year in Wichita, Kansas.

NFPW is a nationwide organization of professional women and men pursuing careers across the communications spectrum.

The Communicator of Achievement award is the highest honor bestowed by NFPW upon those members who have distinguished themselves within and beyond their field. The recipient, chosen from nominees selected by state affiliates, is recognized for exceptional achievement in the communications field, as well as service to NFPW and to the community.

Hall is a prolific freelance writer and author of seven nonfiction books.   She writes for many technical publications in the engineering and construction fields. A former high school mathematics teacher, she enjoys explaining technical subjects to nontechnical people.

She teaches short courses for writers and speaks to diverse audiences about the topics of her architecture and space history books.

Her 2011 book, “Out of This World: New Mexico’s Contribution to Space Travel,” won first place (nonfiction book, general) in the New Mexico Press Women’s Communications Contest.  Her 2014 book, “Space Pioneers in Their Own Words,” was named Best Book in the New Mexico-Arizona Book Awards.  Her latest book, “The Complete Space Buff’s Bucket List,” was released in January 2016.

This spring, she was named one of the top 10 speakers in the National Space Society’s Space Ambassadors program.

Barbara Awalt of LPD Press/Rio Grande Books says, “Loretta is a great example of women in science and math for the younger generation.  It is an example that we need more of in every state.”

Hall is also a member of SouthWest Writers, and the Historical Society of New Mexico’s speakers bureau. Her community service includes speaking about writing as a profession at schools; serving in her church; judging science and engineering fairs; and coaching volleyball and soccer teams.