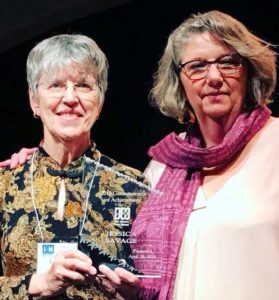 New Mexico Press Women have named Jessica Savage as their 2018 Communicator of Achievement. The award was announced at the recent annual NMPW conference in Santa Fe.

Savage is currently a scholarship advisor in the College of Arts and Sciences at New Mexico State University, where she oversees scholarships for more than 300 students in 24 departments. She is also the media and communications director for the National Public Observatory where she publicizes astronomy outreach programs and works through press releases, feature stories and newsletter articles.

As an award-winning journalist with 17 years of experience in media relations she has been a regular contributor of feature stories and profiles in the Desert Exposure, a monthly newspaper, and Las Cruces Magazine. Many articles Savage wrote as a reporter for the Deming Headlight were published throughout the state and regionally through the Associated Press.

Jessica also has extensive experience in data management and retrieval systems, including a position with the Chihuahuan Desert Network, an inventory and monitoring arm of the National Park Service.

For the last several years, she managed the Zia Awards for New Mexico Press Women, a prestigious book award for authors in the Southwest. She has been a board member of NMPW for nearly a decade and is public relations director for the state chapter.

The chapter Communicator of Achievement award goes each year to a member who has a record of journalistic achievement and of public service. COA’s are also honored for their work with press women.