An unprecedented six Zia Book Awards were given to five New Mexican women for their outstanding book-length work in non-fiction and one publisher by the New Mexico Press Women this month at their annual conference in Santa Fe.

The Zia Award is given annually to a woman book author who lives or has ties to New Mexico. Each year the contest focuses on one of three genres: non-fiction, fiction, or children’s literature. 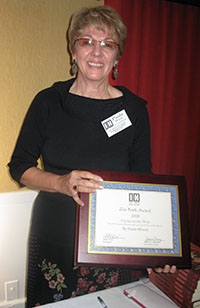 Receiving the top honor was Las Crucen Paula Moore for “Cricket in the Web,” which is the result of three years of intense researching and interviewing to flesh out the story of the Cricket Coogler murder case and its political aftermath.

Albert Fountain and his young son Henry in 1896, another case that still triggers heated debate in
Doña Ana County as well,” Moore said.

Published in 2008 by University of New Mexico Press, Moore’s book, subtitled “The 1949 Unsolved Murder that Unraveled Politics in New Mexico,” has also been honored by the state and Doña Ana County historical societies with awards. In the history of the Zia Award given since 1954, seven other Las Cruces-area women have received the honor, the most recent being Linda Harris, also a non-fiction honoree.

Other honored titles dealt with subjects as diverse as Native American healing, wild and domestic animals, a New Yorker who falls in love with the Southwest and New Mexico on hiking excursions, and nuclear power. Each book was set at least in part in New Mexico. The other New Mexican women honored for their non-fiction books are:

Scarbrough’s healing journey brought her to the revelation that she was a warrior in an archetypical sense. Beath quotes Barry Lopez in her introduction: “The differing landscapes of the earth are hard to know individually. They are as difficult to engage in conversation as wild animals.” Through her hiking and journaling Beath realizes she has done just that, while we learn reading through her book of essays Rudner is the one engaging wild animals. Guided by a Sandia National Laboratory scientist and environmentalist, novelist Cravens seeks to counter his nuclear endorsements, but ends up totally convinced nuclear energy should replace carbon-based fuel sources.

Runner-up honors were given in 2007 (fiction) and 2008 (children’s literature) but addition awards were given this year because of the large number of submissions and it was the end of the three year term of the current Zia Award Chair. The Chair Award, given to Beath represents the personal favorite book of the committee chair and this is first time the award has been given. Cravens received the Honorable Mention, also a first time honor for a Zia Book Award submission.

Publisher UNM Press received a certificate acknowledging their role as submitter of the three books that have received top honors in the three-year cycle covering the three genres recognized by NMPW with a Zia Book Award. The titles submitted and honored with the top award by UNM Press the past three consecutive years are: The King’s Lizard by Pamela Christie (Fiction – 2007), The Voyage of the Beetle by Anne H. Weaver (Children’s Literature – 2008) and Cricket in the Web by Paula Moore (Non-Fiction – 2009).

NMPW is the state affiliate of the National Federation of Press Women, organized to provide professional development, networking and First Amendment advocacy for women journalists and communicators. NMPW, an inclusive media organization, is open to men and women. Visit the website at: www.NewMexicoPressWomen.org.